The Infusement Altar was added to Craftland in the 6.0 Update. The altar is used to create items like the

Tourmaline Pickaxe and other items. 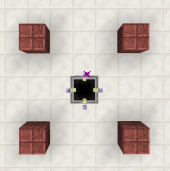 A screenshot of a correctly assembled Infusement Station using

Hellfire Stone as the blocks in the corners.

Infusement Book shows that a 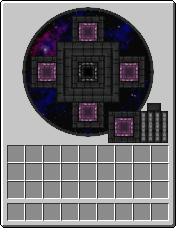 Infusement Altar GUI. The center slot is where the stars are placed and around is the recipe desired.

The Infusement Altar must be setup with 4 blocks, one block away in each corner, like the image to the left.

Skulls are a neccessary material in powering the Infusement Altar. All skulls that are placed on the four corners are consumed once the recipe has finished.
The recipes within the Infusement Altar currently require specific 4 skull combinations which could use the following;

The Infusement Altar requires a special type of fuel known as a Star. The list of Stars are:

You can obtain the

Wither Soul from attacking an Ender Dragon/Wither with a

Dark Scythe and then killing them.

There are currently 8 infusement recipes in the game.