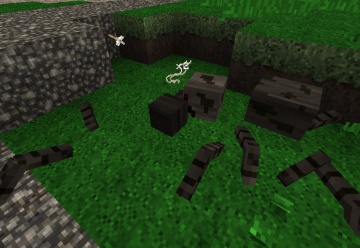 A spider that was killed while Mob Dismemberment was active

Mob Dismemberment allows a mob to fall apart replacing the death animation with such as falling apart. The body parts stick around for a few seconds before vanishing and is adviced to be turned off if you're lagging at any time.