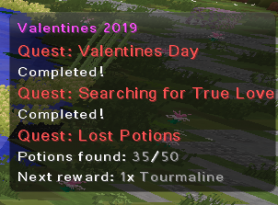 - This Quest is known as Lost Potions in the sidebar.
Similar to Grimlock's Skull Hunt and Xmas's Present Hunt, this hunt requires the player to run around looking for a specific block to right click. In this case, it is a Potion Bottle (pink)! Upon right clicking a potion bottle, the player's total amount of potions increases by 1 (alongside a nice little effect). Below is the milestone requirements;

The users that made this event happen... (Rank colours are at time of event release)