Craftland has a skill system based on the plugin McMMO. You can get more information about the plugin's features here. McMMO is a plugin that allows people to role-play in a way, recording statistics and leveling up. Mining or killing hostile mobs with weapons for example will give experience on the skill to the player. There are a total of 11 skills to level up (taming being removed due to frequent bugs in the 4.91 update).

Leveling up a skill increases its potency. For example, leveling axes increases your damage dealt with axes and gives an increasing chance to deal critical hits. Skills may be leveled up to 1,200 as of the 4.91 update, (instead of 1000 prior to the update) requiring more experience as the skill increases in level. The levels from 1,000 to 1,200 will decrease the skill's ability's cool down, but most require significantly more experience to increase. 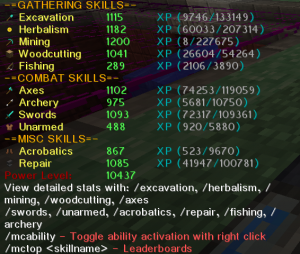 There are commands for the McMMO plugin to clarify information about various McMMO statistics and abilities.

/mcability- Toggles the active ability on and off.